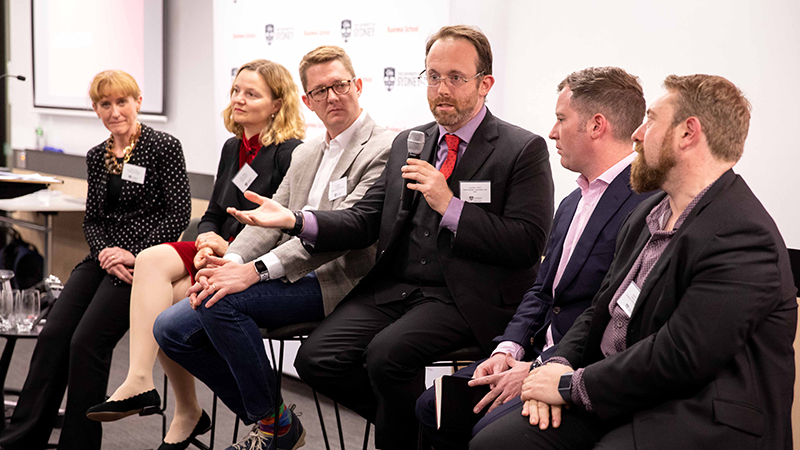 It’s not possible, it seems, to get through a professional presentation without being asked to respond to a survey courtesy of a questionnaire app. And thus it was at the Future Fintech event hosted by the University of Sydney Business School, where the intriguing question requiring audience participation was:

What is the most likely outcome for the future of fintech in Australia?

Status quo, “industry participants will gradually migrate to accommodate the technical facilities afforded by greater speed, transparency and reduced costs with uptake of alternatives continuing to be slow or capture insignificant market share.”

Consolidation, “Fintech firms consolidate and/or are bought out by incumbents as it becomes clear that aspects of the financial services’ value chain can only sustain a limited number of providers.” So, The Hunger Games with bespoke financial weaponary.

And lastly fragmentation where “a new industry structure emerges involving dynamic switching between products and services, assisted by AI helping us make better choices. But the tradeoff is the overall coherence and transparency of the financial services market is reduced.” An exciting, albeit confusing, Fintech future.

The assembled panel was dynamically designed not to fall into tedious agreement. They did not disappoint.

Astrid Raetze (Executive Director, Automic Group) was energised about the disruption to come.

“What’s going to happen to consolidation when some of the big technology companies move into financial services? We are seeing that a little bit already out of China with Tencent and Alipay. How will we respond when the US tech giants, Facebook, Amazon, Netflix and Google follow Apple into the financial sphere?

“We’re used to dealing with tech giants, and we’re more than happy to pass payment information through them,” Ms Raetze pointed out. “What happens when they start making other financial services available and what does that do to the concentration of wealth in our global community?”

Professor Kai Riemer (Business School, University of Sydney) was more of a consolidation sort of guy.

“From a customer point of view consolidation is not actually such a bad thing. Because if we look at our daily lives, there’s so many variables that each and every one of us have to take care of that for most people, looking at their finances is not something that people cherish and want to do every day.”

“From a consumer point of view, consolidation or a simplification of the market rather than random competition and all these options, is actually also not such a bad thing.”

“Isn’t consolidation the thing we had…and isn’t that how we got to the Royal Commission?”

“Having a one shop stop that works and is well regulated I still prefer over a fragmentation which also comes with transaction costs,” Professor Riemer returned serve.

Into the fray stepped the regulator, Jonathan Hatch (ASIC) brandishing a ruler not to rap any knuckles but to point out that in the battles to come, size will matter as well as the changing nature of how services could be delivered.

“We are dealing with much larger entities worldwide (that) are now merging different areas together. The concept of what is financial services may change over time, I’m already seeing things that I refer to as lifestyle apps. The idea is this application will deal with everything you want to do in your life, including say managing your wealth, your retirement, your payments, your travel –  including insurance. It’s a completely different model.”

Entrepreneur Nick ‘I don’t believe in the status quo’ Armstrong (CEO, Identitii) is, unsurprisingly, a fragmentation man, albeit one who sees acquiring other businesses as a necessary part of a “production cycle.”

“We’ve got roughly a three-year product cycle in our business. And we’ve got to keep reinvesting in our product to enable us to continue to win new business. If we can’t keep doing that, then we may have to acquire businesses. But I think if we get too big by consolidation we might stop innovating”

At this point in the proceedings Dr Gozman spoke up for the status quo. Open Banking, he posited,  has been slower than hoped, in  the UK.

“We’ve also seen a slow uptake of cloud. A lot of the neobanks that have come along, people still have questions whether (consumers) really want to put their money in there. Fintech is changing, in some ways slowly, the way products and services employed and is creating more choice. But that’s a slow burn.”

The final word was left to Ms Raetze, who had some sobering advice for the more callow audience members.

“If you’re a startup Fintech and you’re wanting to sell your services to a bank, the banks have got a two-year process to integrate your technology with theirs.

“If you talk to one of the four, they usually have about 200 software items on the ‘to do’ list that they haven’t integrated yet. So you just get to the back of the queue.

“And, frankly, consolidation play is actually not a tech play. It’s a customer acquisition play and they could not give a damn about your tech. They’ll buy you and they will ditch the tech. What they will take is your customers and then they will on-board your customers on their old legacy systems.”

The vote in the room:

So we have the odds – but exactly who they will favour is still to play out.