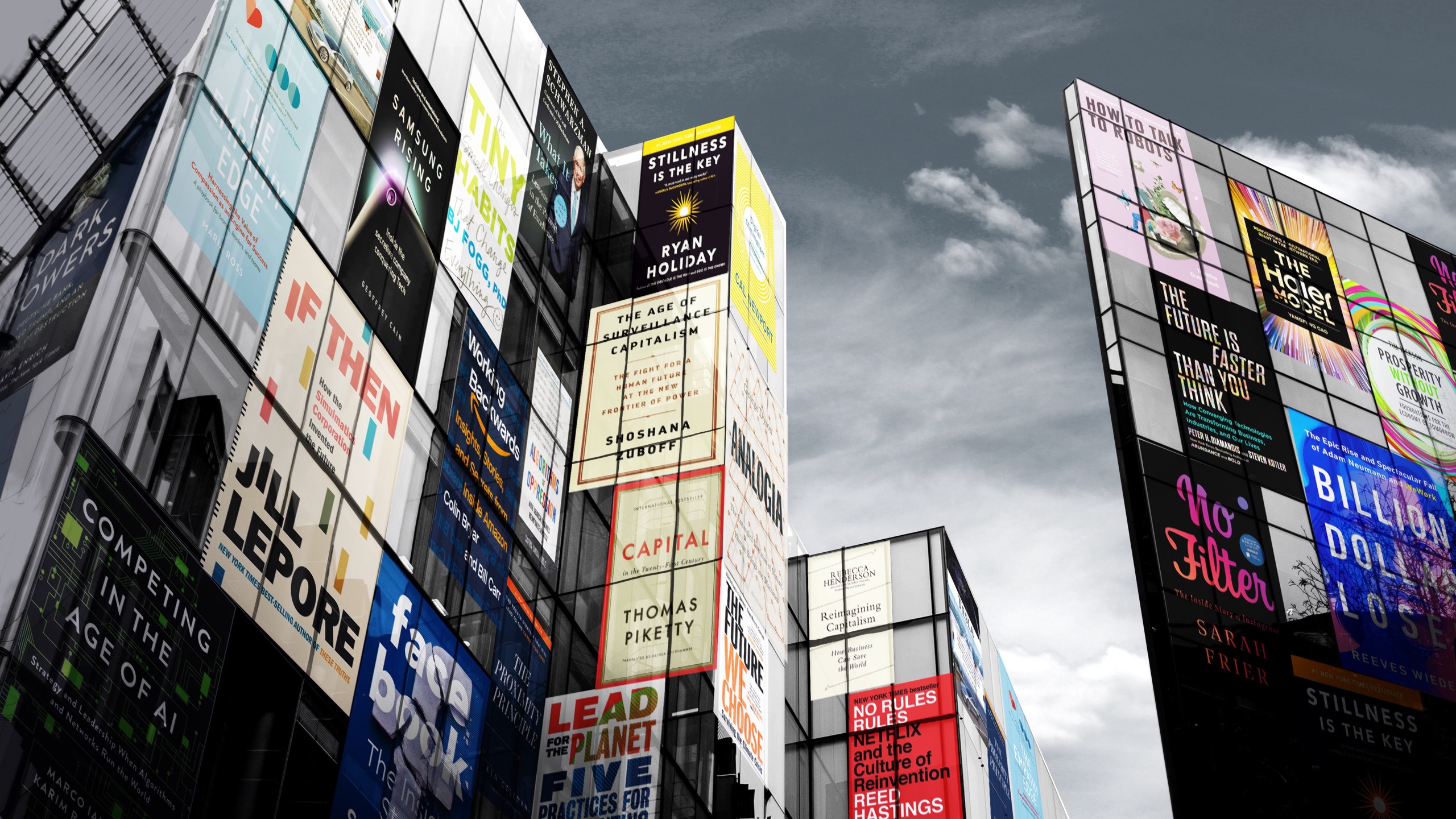 In the crowded ‘best books of the year’ lists, the sub-genre of best business book has blossomed as consultants, media oracles, influencers and academics tabulate their recommendations on what ideas are worth the deep-dive commitment demanded by a book.

As a species, the annual best business book list is a valuable time saving device but with so many competing lists on offer, we have deconstructed the most prominent lists into plain-speaking categories.

A mash-up of personal insights and stirring can-do attitude propels this one to be the single biggest category across all the best business book lists. These texts, usually grabbed at airport newsagencies (pre-COVID, naturally) are generally an extended version of a solitary idea and are highly popular on the lists of Fortune and Inc publications.

Books featured as 2021 “must reads” include: Tiny Habits by B J Fogg, a guide to hitting your 2021 goals one micro move at a time. At either end of the personal mantra book guide are What it Takes by Stephen Schwarzman, billionaire founder of private equity mega firm Blackstone and Digital Minimalism Choosing a Focused Life in a Noisy World where author Cal Newport offers tips on disconnecting as a path to a more wholesome approach to meaningful work. Also multi-listed was The Proximity Principle and Stillness is the Key – the lesson being how to get ahead by staying still. We don’t know exactly how that works – so good luck.

Revealing the surprising power of the ‘real you’ for greater success, exemplified by The Empathy Edge: Harnessing the Value of Compassion as an Engine for Success by Maria Ross. Alternative title ‘Putting yourself in other people’s shoes helps you understand them better’. So, empathy is important to be a good manager? Who knew!

An excuse for yet another book on Amazon, Tesla, Netflix, Facebook or Instagram featuring a stirring narrative whereby broad learnings are pulled from the story of one unique company and presented as applicable to everyone. Fortune and the Financial Times featured many such books including the two ‘noes’ – No Rules Rules: Netflix and the Culture of Reinvention and No Filter, the Inside Story of Instagram by Sarah Frier. Forbes listed How Elon Musk and Company Made Electric Cars Cool and promising privileged peeks are Working Backwards: Inside Stories and Secrets from Inside Amazon, Facebook: The Inside Story. Looking outside the US, Samsung Rising and The Haier Model examine a Korean and Chinese industrial unicorns respectively.

Schadenfreude (or books about failure)

Happily, German has a word for rejoicing when others fail very publicly. The New York Times list was all over this category featuring Billion Dollar Loser: The Epic Rise and Spectacular Fall of Adam Neumann and WeWork, that goes to great lengths to prove that Covid did not cause the demise of this real estate business disguising itself as a tech unicorn, but rather its bullshit business model exemplified by CEO Neumann’s many delusions about how an office space lender will create world peace. Also in the failure category is a pull together of Donald Trump’s dastardly Deutsche Bank dealings, Dark Towers.

Exactly what it says on the box – books that fan the hype and are crammed with buzzwords – such as The Future is Faster Than You Think, by Peter Diamandis and Steven Kotler. Diamandis, founder of the Singularity University, proposes that AI and other technologies are converging and will sooner rather than later merge with human intelligence causing us to transcend our biological limits. We’re all for it. That should solve Covid in the process, right?

While not intellectually surprising, these gems nevertheless nourish with good solid arguments covering technically driven business changes. It can usually be digested on a regular diet within 5 days. A good one is How to Talk to Robots, a Girl’s Guide to a Future Dominated by AI by Tabitha Goldstaub, an author with a track record confronting male bias in tech. Also on the healthy list is Sophia Noble’s Algorithms of Oppression and Analogia and The Entangled Destinies of Nature, Human Beings and Machines by George Dyson, a science historian. Dyson tracks 300 years of humanity’s coexistence with technologies that we increasingly understand less and, he predicts, soon will be unable to control.

Also in this category is Competing in the Age of AI: Strategy and Leadership When Algorithms and Networks Run the World from Harvard Business Review Press, whilst mainly a fair summation of developments in the sector does venture into hyperbole towards the edges.

Potential classics, these books gift genuinely novel insight, often about matters that are right in front of us, but are not easy to see. A proven classic from a few years back is Tim Jackson’s Prosperity without Growth: Foundations for the Economy of Tomorrow in which Jackson charts an economic alternative to our obsession with endless growth. This year’s entries include Reimagining Capitalism: How Business Can Save the World by Rebecca Henderson which made the list for Bloomberg, McKinsey and the Financial Times. Henderson critiques the current obsession with maximising shareholder value and examines the critical role of purpose driven businesses. Perennially on this list is Thomas Piketty’s missive Capital in the Twenty-First Century and always on our list is The Age of Surveillance Capitalism by Shoshana Zuboff – not so much an eye opener as an eye popping take-down of big tech (aka Google and Facebook) and their socially and politically destructive business models. Don’t stop reading in the middle (it’s a big book), her thoughts about the implications for why we need to rethink our assumptions about capitalism are particularly important for the years to come.

Surprisingly, considering the existential crisis posed by climate change, the lists ignored environmental themed books, with the exception of The Future We Chose: Surviving the Climate Crisis by Christiana Figueres and Tom Rivett-Carnac. Figueres, the former UN Climate Change diplomat, sets out business’ role in helping to avert the looming climate crisis. Given the dearth of recommendations elsewhere, we asked our in-house environmental expert, Professor Chris Wright, who provided the following recommendation: Lead for the Planet: Five Practices for Confronting Climate Change. Author Rae Andre’s offers a plain-speaking guide for how to overcome organisational inertia in helping to solve climate change issues.

We get it, everyone is busy, so we have kept our list to the year’s essential top 3:

No Filter: The Inside Story of Instagram, by Sarah Frier
Charting the early days of Instagram and tracking its takeover by Facebook, Frier pulls apart what happens inside an organisation when it devolves from serving the people who use your product and shifts into solving problems for business purposes, where profit is the driving force.

If Then: How the Simulmatics Corporation Invented the Future, by Jill Lepore
The story about a 1960’s company credited with inventing data analytics in political campaigning (and helping get President Kennedy elected) is in fact the true history of the use of data to manipulate us the people. Lepore’s argument is an excellent scaffold for understanding how we should think today about predictive analytics, data collection and audience segmentation and how these tactics have been framed in both political discourse and business conversations.

The Age of Surveillance Capitalism: The Fight for a Human Future at the New Frontier of Power, by Shoshana Zuboff
A book so impactful the term ‘surveillance capitalism’ has entered the language as the best description for the mutant form of capitalism that has found a way to use tech for its purposes. Don’t stop reading in the middle (it’s a big book), Zuboff’s thoughts about the implications for why we need to rethink our assumptions about capitalism are particularly important for the years to come.

You can hear Sandra and Kai talk more about these picks and the various lists of books on The Future, This Week.