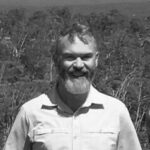 Ian is an environmental scientist with extensive experience working in biodiversity conservation and discovery, oceans governance, fisheries management, wildlife regulation, and protected areas. He has led major programs in CSIRO both in marine science and terrestrial and freshwater ecology. Previous to this Ian worked within the Australian Government as a Senior Executive leading oceans management, sustainable fisheries assessments, international wildlife management, as well as the Director of the Australian Biological Resources Study.

Ian is the co-Chair of the national State of the Environment 2021 report, the Chair of the Atlas of Living Australia, the NESP Resilient Landscapes Hub Steering Committee, and the Western Australian Biodiversity Science Institute. Ian is also on the Board of the Western Australian Marine Science Institution. He maintains an ongoing research interest in multiple-use management and coastal systems.

Ian has undertaken a number of international roles, including working within the United Nations Secretariat to the Convention on Biological Diversity, and has led the Australian delegation to the Convention on International Trade in Endangered Species, as well as negotiations under the Convention for Migratory Species and the Convention on Biological Diversity. Ian has taken a leading role in oceans governance, particularly in the development of the Global Open Oceans and Deep Seas regionalisation of the world’s oceans, and the development of criteria for the identification of Ecologically and Biologically Significant Areas (EBSAs) under the CBD. He has chaired two regional meetings (Western South Pacific and the Southern Indian Ocean).

Ian has extensive experience in the input of science into policy and management, helping establish Australia’s representative protected areas systems both on land and sea, and has participated in many successful science-based government processes to bring together the best available information to tackle pressing management issues. Many of the products he conceived and brought into existence are now fundamental tools in management, including Australia’s Collaborative Protected Areas database, and Australia’s biogeographic frameworks for marine & coastal, and terrestrial ecosystems.