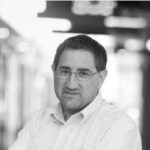 Prof. David Levinson teaches at the School of Civil Engineering at the University of Sydney, where he leads TransportLab and directs the Master of Transport. He is an honorary affiliate of the Institute of Transport and Logistics Studies, where he is also a member of the Board of Advice. He was previously at the Department of Civil, Environmental, and Geo- Engineering at the University of Minnesota. He was Managing Director of the Accessibility Observatory, and directed the Networks, Economics, and Urban Systems (NEXUS) research group. He held the Richard P. Braun/CTS Chair in Transportation (2006-2016). He also served on the graduate faculty of the Applied Economics and Urban and Regional Planning programs at the University of Minnesota. In academic year 2006-2007 he was a visiting academic at Imperial College in London.

In January 2005 he was awarded the CUTC/ARTBA New Faculty Award. He earned a Ph.D. in Transportation Engineering at the University of California at Berkeley in 1998. His dissertation “On Whom the Toll Falls“, argues that local decision making about managing and financing roads will most likely lead to direct road pricing, which will allow the efficient allocation of scarce road resources (and thus reduce congestion). He has also conducted research into travel behavior.

He received the 1995 Tiebout Prize in Regional Science for the paper “Location, Relocation, and the Journey to Work”. From 1989 to 1994, he worked as a transportation planner, developing integrated transportation and land-use models for Montgomery County, Maryland. He then applied those models for multimodal network planning and growth management.

Levinson has authored or edited several books, including Elements of Access, Spontaneous Access, The End of Traffic and the Future of Access, The Transportation Experience, and Planning for Place and Plexus, as well as numerous peer reviewed articles. He is the editor of the Journal of Transport and Land Use.